What defines a person’s legacy? Is it a passionate, lifelong dedication to a career? Is it growing a large and happy family? Is it a lifetime of giving back to a community? The word evokes a deep sense of honor and respect and is reserved for only very special people. One of those very special people is Mrs. Virginia DuPuy, who was recently presented with the Greater Waco Chamber Legacy Award and who is most deserving of the word “legacy.”

The primary purpose of the Legacy Award is for the Chamber and the business community to honor citizens for their volunteer leadership, their impact and their sustained investment of time, talent, innovation and collaboration to addressing the needs, challenges and opportunities of their community. The Chamber created this award to recognize a leader in our community for a lifetime of service, not only to the Chamber but the entirety of Greater Waco. 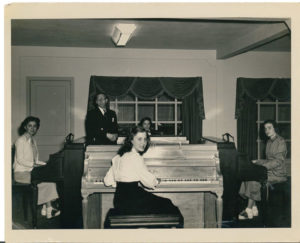 Virginia seated at the piano

Virginia was born and grew up in Houston, attending college at the University of Houston. She soon transferred to Baylor University, where she earned both her bachelor’s and master’s degrees in drama. She had planned to study business but discovered and cultivated a passion for writing, designing, and directing in the theatre. During her time in the master’s program, Virginia was an instructor and business manager for the Baylor Theatre Department. It was during her time at Baylor that Virginia met Leslie DuPuy, the man who would become her husband.

Virginia has a very diverse artistic background. She began working with Luanne Klaras on a “Youth in Motion” program. They worked together with a diverse group of children, writing scripts and teaching them the art of drama. The group began performing their plays locally and eventually took their plays to Austin and San Antonio. This work inspired Virginia to take on a number of commitments in the following years, including the development of an arts and drama program at St. Paul’s Episcopal School, and bringing artists together to display their work in public spaces like the Art Center, Waco Regional Airport, and the Waco Convention Center. Ultimately, she decided to open and run her very own Virginia DuPuy Studio. 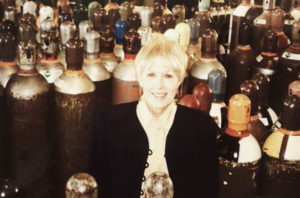 In 1983, Virginia decided to join her husband Leslie in the family business and started working at DuPuy Oxygen, a compressed gas and welding supply distributor that was opened in Waco in 1954 that has since grown to an impressive seven locations in seven counties employing over 75 people. After working at DuPuy Oxygen for a few years, Virginia realized that she was very passionate about the company and the work she did, so she began working for the family full-time. 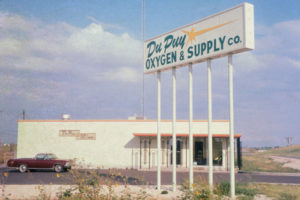 In 1990, Virginia joined the Board of Directors at the Greater Waco Chamber, which kicked off an 11-year run of executive service to the Chamber. In 2000, Virginia became the first female Board Chair that the Chamber had ever had in its then-83-year history. She went on to become the first female president of the Waco Business League in 2004; at this point, in an effort to have a stronger presence of business professionals on City Council, she was asked to consider running in District 3, and was elected. In 2005, current mayor Dr. Mae Jackson, a good friend of Virginia’s, passed away unexpectedly, leaving the mayor’s seat unfilled. Virginia saw a big opportunity and a step that made sense for her; all of her life, all of the work she had done in and for the community and the many ways she served and gave back, it all led up to this moment. Virginia became Mayor of Waco in 2005 and served in that capacity until 2010, and her leadership during that time is possibly the brightest star in her legacy. 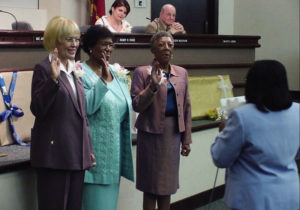 Virginia helped set a standard of conduct for future Councils, a standard that is still in place today. Her good friend Bill Clifton presented her with the Legacy Award at the Chamber’s annual Member Celebration Reception, and during his presentation, he reflected on what made Virginia a truly outstanding leader during her time on City Council and serving as mayor. “Virginia is an excellent listener,” he said. “She was a mayor for all of our citizens, and she worked diligently to understand what was important to each council member and the citizens they represented… Tough issues were resolved and actions turned into realities – in short, things got done.” 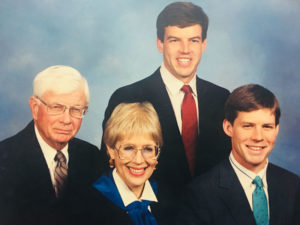 Virginia and her husband Leslie and their sons Carr and Cary.

After her service as mayor, Virginia still was not done building her legacy. She decided to center her focus on education in the community and founded the Education Alliance, which worked to improve educational opportunities at all levels for all citizens. In 2014, Virginia helped morph her Education Alliance into the organization known today as Prosper Waco, whose mission is to build an environment in which ALL members of the Waco community are able to measurably improve their education, health, and financial security.

Virginia lost her husband Leslie in 2018, but lives in Waco and is surrounded by her beautiful family, including her sons Carr and Cary, their wives LaRaine and Mandi, and her four grandchildren Riley, Scott, Paige and Neal. Virginia’s face lights up any time she gets the opportunity to tell people about her family, and it is clear that they truly represent the legacy that Virginia has spent her life building. Her son Cary gave Bill Clifton a statement to use during the presentation of the Legacy Award in which Cary best sums up what makes his mother special: 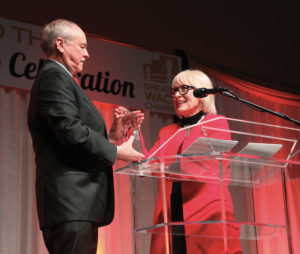 “I can’t very well gauge the worth of Mom’s accomplishments to civilization’s steady march forward, but I can recognize a crucial contribution and the contribution for which I laud her the most. It’s something every child should experience: the security, comfort, and confidence afforded by the unceasing and unconditional caring, love, and affection from a mother who receives failures and shortcomings with acceptance and encouragement to persevere; who finds numerous openings for exploring and developing her child’s creative skills; who habitually sees the world through hopeful eyes and a generous spirit — all while holding gratitude for her children’s own capacity, humble acknowledgement of their limitations, and appreciation for the greatness of others.”

The Greater Waco Chamber is proud to have the opportunity to honor and recognize Virginia DuPuy as the 2019 Legacy Award recipient.

The number of civic activities, committees, organizations and people that have benefited from Virginia’s service is too high to imagine, but here are some of the highlights of her career and community service: