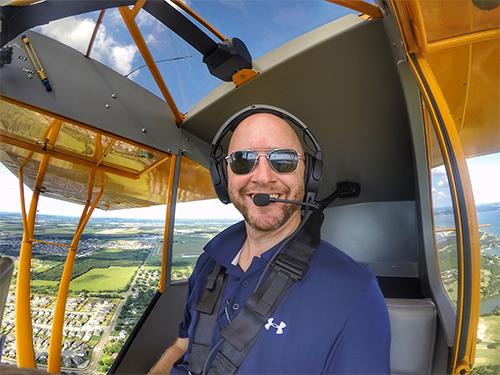 I have been interested in aviation ever since my childhood. When I was five years old, my parents took my sister and me on vacation to California. We went to Disneyland, Universal Studios, the beach, and lots of other places; however, I hardly remember anything about that trip. What I do remember was the airplane ride there. I was amazed by how high up in the air we were, how fast we were going, and how small everything appeared to be underneath me.

Fast forward about nine years, my fourteenth birthday. My parents surprised me with a one-hour discovery flight in a Cessna 172 out of the McGregor Executive airport. The flight instructor flew me over Waco, over my house — I even got to hand-fly the plane for a while. From that moment on, I knew I would be a pilot when I grew up.

After high school, I enrolled in Texas State Technical College’s Aircraft Pilot Training program in the fall of 2001, right before the September 11 terrorist attacks on the World Trade Center. My wife, Lee Ann, and I had some serious discussions as to whether or not I should continue pursuing the profession, but after prayerful consideration we decided to press on. It took a lot of time, financial planning and hard work to get through college while balancing a young family and a full-time job.

After graduating from TSTC with my associate degree in 2005, I began working as a flight instructor at TSTC while continuing to pursue my bachelor’s degree in aviation via distance learning at Utah Valley State College (UVSC). At the time, UVSC was one of the few colleges that offered an aviation degree through distance learning. By the end of 2007, I had completed my bachelor’s degree and earned enough experience to move forward in my career just as the “Great Recession” of 2007 began to rear its ugly head. The recession hit the aviation industry hard. I had been pursuing opportunities with regional airline carriers and had been offered several jobs, but due to the drastic economic decline, I never received a new hire class date. Major airline carriers ceased hiring and attrition came to a standstill. One of the carriers that offered me a pilot position even furloughed a class of new hires right out of training. 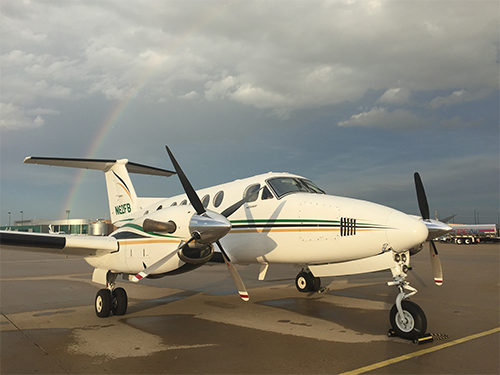 Despite the industry gridlock, I pressed on and continued working as an instructor at TSTC and eventually worked my way up to chief flight instructor. Despite the state of the industry, I still found flight instructing a rewarding job — I really enjoyed seeing student pilots fly solo for the first time and eventually fulfill their dreams of earning their pilot certifications. After seven years of teaching, I was offered a job flying a King Air (a small twin turboprop) for Waco-based Texas Farm Bureau. I flew Texas Farm Bureau’s executives and board members all across the state to attend various business meetings and events, all of which were in support of Texas’ great agricultural economy. Last year, a friend of mine invited me to apply for my current job at XOJet — a California-based jet charter company that flies individuals all across North America.

I began working for XOJet and currently pilot their fleet of Cessna Citation X’s, one of the world’s fastest civilian aircraft. XOJet flies everybody from private individuals to Fortune 500 executives — I even get the opportunity to fly a celebrity every once in a while! I work eight straight days on the job and am home for six days. During a typical eight-day rotation, I quite literally crisscross the country and then some, with stops in Burbank, New Orleans, Telluride, Toronto, Louisville, Teterboro, and Miami just to name a few. During those eight days, I could end up just about anywhere on the North American continent depending on the schedule demands of the company and who is being flown. During my six days off, I spend quality time at home with my family, volunteer at church, and give occasional flight lessons while my kids are at school. One of the many things I love about this job is that it allows me and my family the flexibility to live anywhere in the country while continuing to build a career in the industry that I love. Given this opportunity, Lee Ann and I are still proud to choose to call Waco “home.” 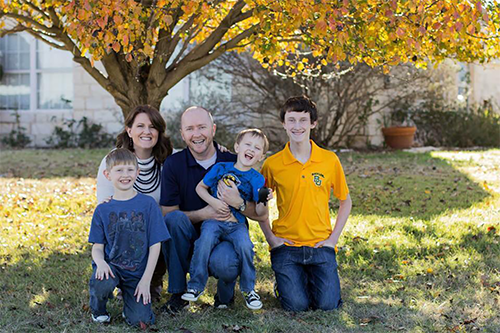 Waco is a great place to live, work and raise a family. There are some awesome school districts in the area for both my kids and my wife Lee Ann, who is proud to be an eighth-grade science teacher at China Spring Middle School. Not only are the school districts great, but there are churches literally on almost every street corner. My family and I are very involved at Redeemer Presbyterian Church, where I serve as a deacon, Lee Ann works with middle and high school youth and our kids are heavily involved in youth programs. Waco also has a youth league for just about any sport the kids are into; my three boys have been involved in Little League baseball, basketball, soccer and taekwondo. My boys also love their board games, comics and sports memorabilia, and one of our favorite spots in town is King’s Landing and Bankston’s Comics. I consider myself an outdoor recreation enthusiast and I love the Cameron Park area. I spend quite a bit of my time at home running trails and training for my next race along with the Waco Striders running club.

Today, the aviation industry has never been more alive. Airline pilots have a mandatory airline retirement age of 65, and the industry is on the leading edge of a record amount of retirements over the next several years. According to Boeing, the industry will need over 637,000 new commercial pilots, 648,000 new maintenance technicians and 839,000 new cabin crew members between now and 2036; however, the industry is anticipating a shortage of new aviators to fulfill those needs. This means jobs. Not just as an airline pilot, but across all career opportunities in general aviation: corporate aviation departments, charter companies, flight schools, and even the military are going to need pilots and aviation technicians for the foreseeable future.

One of the most valuable things I have learned in aviation is that people come from all different backgrounds and experiences. The best advice I have for any aspiring aviator is to work hard, study, meet people in the industry, learn from other’s experiences and, above all else, do not be afraid to ask for help along the way. The path to becoming a pilot is full of obstacles and there are plenty of reasons why many people decide not to become a pilot — training cost, demanding schedules, initial pay and experience requirements — and it takes a lot of discipline and passion to overcome those obstacles. It is definitely worth it in the long run. The quality of life I am able to provide my family, the places I get to travel to, the interesting people I get to meet along the way and, quite frankly, the fact that I get to sit in a chair nine miles up above Earth while traveling at transonic speeds is pretty darn cool.