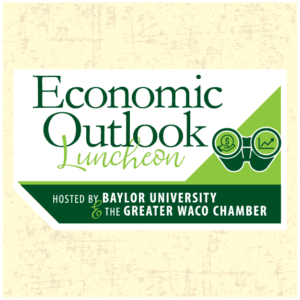 The Greater Waco Chamber of Commerce and Baylor University will partner to bring the business community together to explore economic work and progress over the past year and provide a vision for what the next year may hold. By leveraging academic and professional thought leaders from within our local economy, participants will hear about trends, programs, projects, and initiatives that will continue to thrust Waco forward.

The public is invited to join us.

The Economic Outlook Luncheon will feature presentations from local economic leaders as well as a data-driven keynote presentation from Dr. Sandeep Mazumder, Dean of the Baylor University Hankamer School of Business.

Sandeep Mazumder was appointed as the William E. Crenshaw Endowed Dean of Baylor University's Hankamer School of Business in 2021. He previously served as professor and chair of the Department of Economics at Wake Forest University.

Thank you to our Sponsors

Sponsorships are available. Email ngupton@wacochamber.com for availability and details.